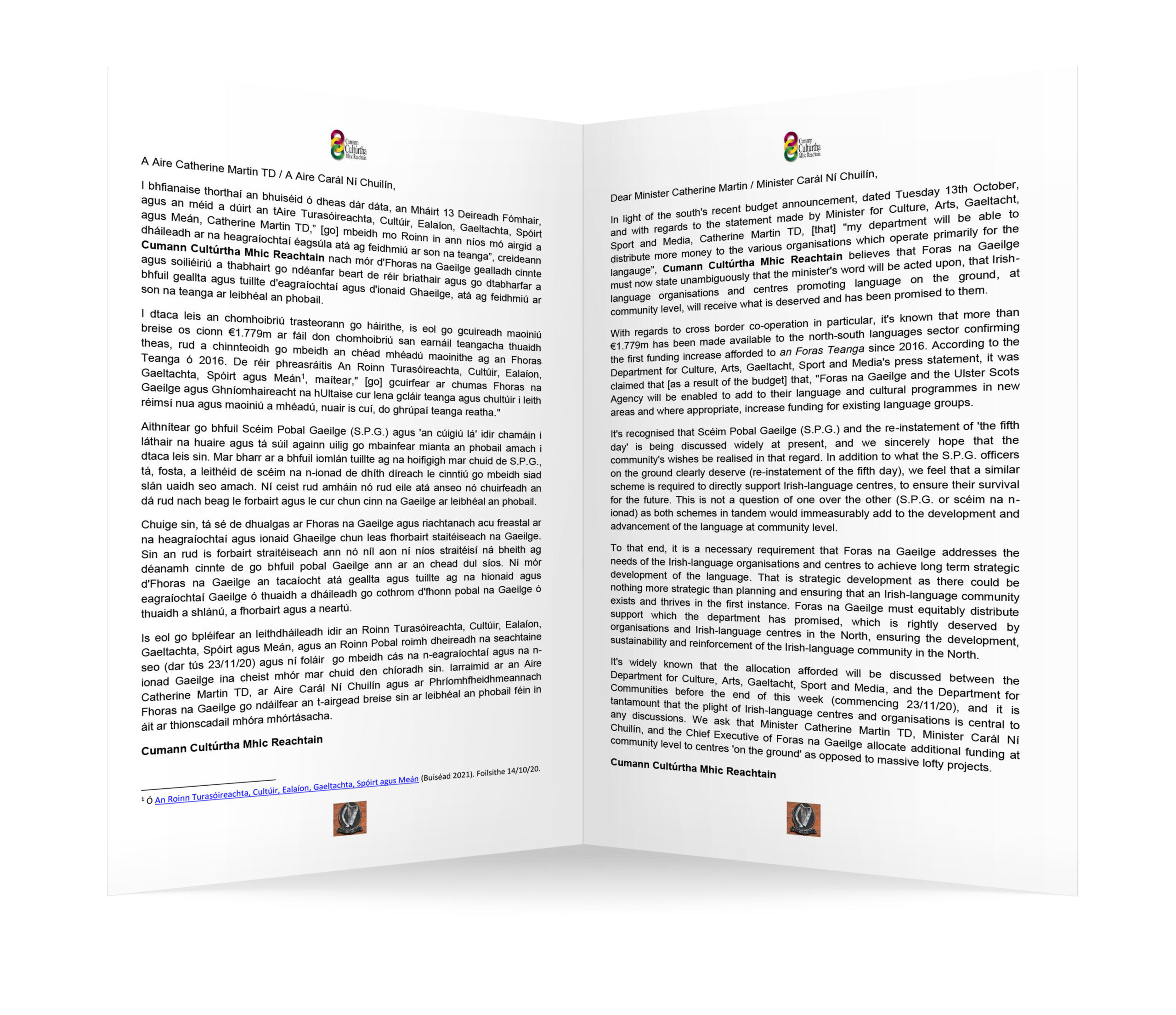 In light of the south’s recent budget announcement, dated Tuesday 13th October, and with regards to the statement made by Minister for Culture, Arts, Gaeltacht, Sport and Media, Catherine Martin TD, [that] “my department will be able to distribute more money to the various organisations which operate primarily for the langauge”, Cumann Cultúrtha Mhic Reachtain believes that Foras na Gaeilge must now state unambiguously that the minister’s word will be acted upon, that Irish-language organisations and centres promoting language on the ground, at community level, will receive what is deserved and has been promised to them.

With regards to cross border co-operation in particular, it’s known that more than €1.779m has been made available to the north-south languages sector confirming the first funding increase afforded to an Foras Teanga since 2016. According to the Department for Culture, Arts, Gaeltacht, Sport and Media’s press statement, it was claimed that [as a result of the budget] that, “Foras na Gaeilge and the Ulster Scots Agency will be enabled to add to their language and cultural programmes in new areas and where appropriate, increase funding for existing language groups.

It’s recognised that Scéim Pobal Gaeilge (S.P.G.) and the re-instatement of ‘the fifth day’ is being discussed widely at present, and we sincerely hope that the community’s wishes be realised in that regard. In addition to what the S.P.G. officers on the ground clearly deserve (re-instatement of the fifth day), we feel that a similar scheme is required to directly support Irish-language centres, to ensure their survival for the future. This is not a question of one over the other (S.P.G. or scéim na n-ionad) as both schemes in tandem would immeasurably add to the development and advancement of the language at community level.

It’s widely known that the allocation afforded will be discussed between the Department for Culture, Arts, Gaeltacht, Sport and Media, and the Department for Communities before the end of this week (commencing 23/11/20), and it is tantamount that the plight of Irish-language centres and organisations is central to any discussions. We ask that Minister Catherine Martin TD, Minister Carál Ní Chuilín, and the Chief Executive of Foras na Gaeilge allocate additional funding at community level to centres ‘on the ground’ as opposed to massive lofty projects.

Commencement of an Irish-language centre scheme package and enactment of a strategic plan for the long-term benefit of centres and organisations.

A plan and announcement from both ministers, and from Foras na Gaeilge outlining that Irish-language organisations and centres will take priority over other massive projects1.

1 Foras na Gaeilge deserve huge praise for the completion and publication of the Uí Mhianáin Dictionary now in the public domain. Foras na Gaeilge should now return their focus on language development at grassroots level and commence a strategic plan for the long-term benefit of Irish-language organisations and centres on the ground.

Equality for all Irish-language centres. All should be treated equitably. (i.e. no preferential treatment afforded to one over the other).

New Project – Check it out.